I like the word quirky, which I think describes a lot of my photos. It’s a kind of odd word with a number of definitions, depending on the source. Most apply to people, but according to vocabulary.com, quirky can also be used to describe things or events that have “an unexpected and unconventional element.” That’s the sense in which I think it applies to my photos.

When I first started in digital photography I was attracted to subjects that seemed strange, surprising, or humorous. But I almost never used photography to demean or mock anyone or anything (and I still don’t). Basically I just took pictures of what interested me. And in those days I lived within a few minutes of some very quirky places, like Orlando’s International Drive.

This first photo is of the infamous pink hotel, Sandy Lake Towers, long since sold, resold and repainted. Back then, the Brazilian owner loved the photo and ordered five hundred postcards for his gift shop. There was even some discussion of putting framed prints in all 200 rooms! The deal never materialized — for one thing, the owner would declare bankruptcy soon — but it was still encouraging to me that anyone was considering buying a large quantity of my work at such an early stage of my interest in photography.

Recently I thought it would be clever to title the photo “Lone Duck,” rather obviously suggesting I hadn’t paid attention to the, er, somewhat imposing background. That, however, would border on mockery, when the truth is I have always liked the image. 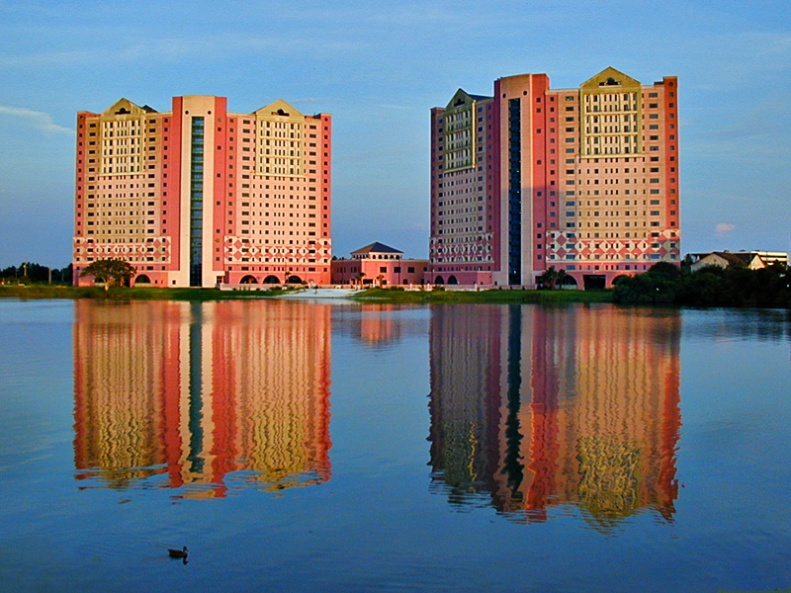 Here’s the hotel today, courtesy of the internet, repainted in more subdued, less controversial colors, . It’s now the Westgate Palace. Glad to see the duck is still there.

The next photo was also taken on I-Drive, this one behind the huge FAO Schwartz toy store at Pointe Orlando, a large, outdoor tourist mall. Since this was taken, the famous toy company filed for bankruptcy, more than once, and was sold and resold. All the locations except the flagship store in New York City have long been closed. So in a sense this has become a photo of a monument to the ultimate failure of a business concept.

I had to lie down on my back on the sidewalk in order to get that angle. 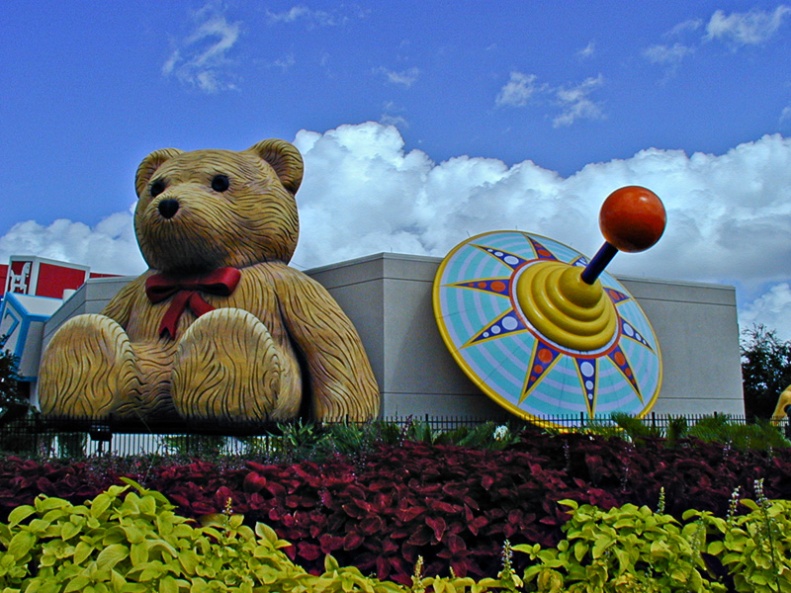 Behind the FAO Schwarz toy store on Orlando’s International Drive, 1999

Here’s one taken about the same time on I-Drive, with the pink hotel looming over a truly bizarre scene. With this one I had no choice but to title it Tourist Capital of the Universe. 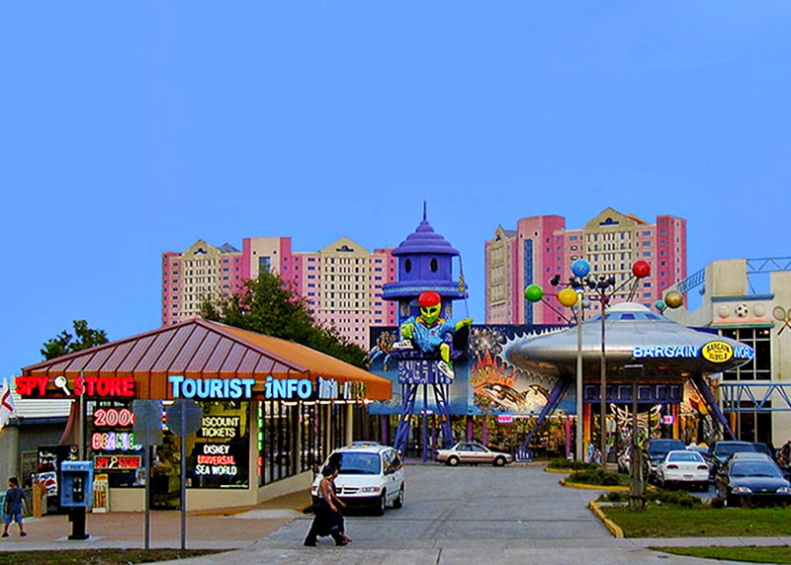 Tourist Capital of the Universe

Back at Pointe Orlando I had some fun Photoshopping the face of my standard poodle, Mr. Red, into a second-floor window overlooking the strange scene below. There was even a Victoria’s Secret just out of the frame to the right. 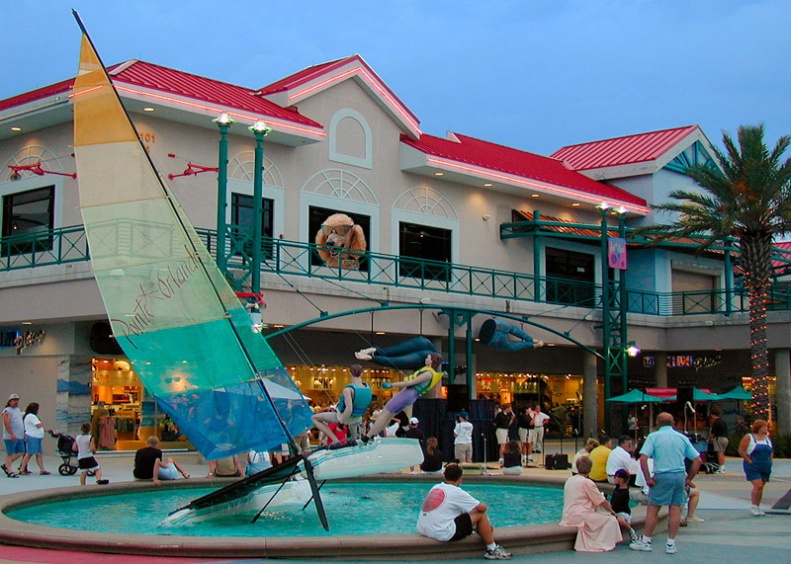 Downtown Orlando is about 15 minutes east of I-Drive, and almost as interesting photographically (stay tuned). Lake Eola, in the heart of  downtown, has long been home to these rental paddle boats. 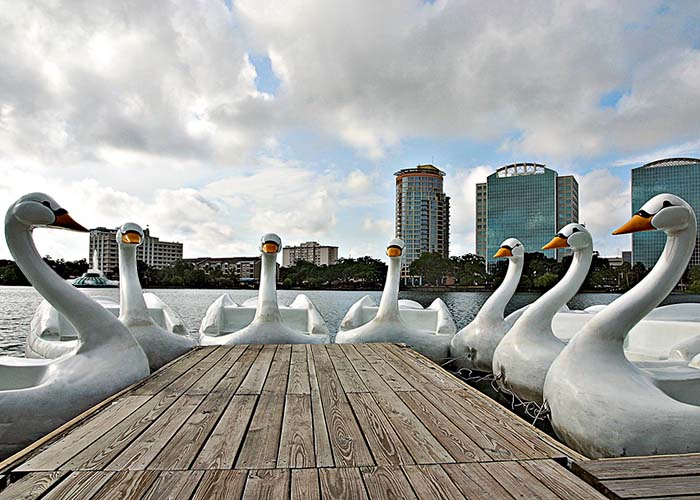 One can’t just stand there and look at those swans without feeling challenged to take one out on the choppy waters of Lake Eola. The following photo was taken from the front of the “boat” while my wife, Barbara, pedaled, not paddled.

I printed the resulting photo as a date-and-time-stamped proof of Orlando’s own Like Ness Monster™. 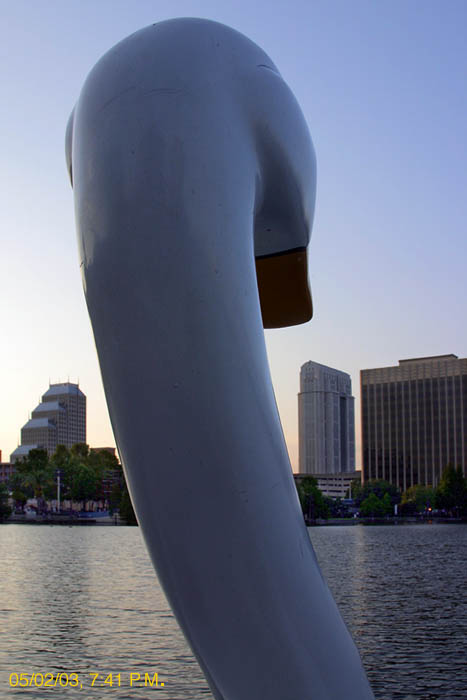 Well that’s all the quirky I’m serving up today, but rest assured I have enough images in The Gallery of Quirks for several more posts like this one.

2 thoughts on “Offbeat and Quirky”